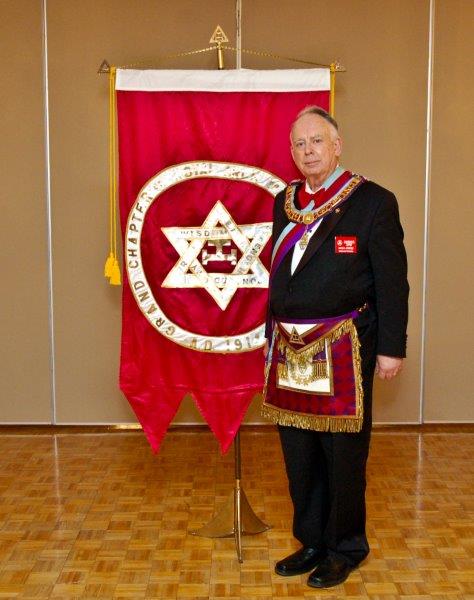 It is my great privilege and honour as Grand First Principal to welcome you to the Web-Site for The Royal Arch Masons of Alberta.

Please feel free to browse the site. There is a fountain of information available.

If you are a Master Mason interested in furthering your Masonic Education through the Royal Arch, don’t hesitate to contact us.

I look forward to visiting with you and sharing ideas with you this year.

Dave Switzer was born and raised in Toronto and North York, where he attended school until age 17 when he joined the RCAF. The next five years were spent “seeing the world”. His tour of duty took him to St.Jean Quebec, Calgary, Fort Churchill Manitoba, back to Toronto and overseas to Metz France. The next 8 years were spent with the Ontario Provincial Police and a smaller municipal police force outside the city of Brampton. In the 1970’s, Dave went into the automotive field, having come out of the RCAF with a Mechanic’s License. In 1987, while working for Nissan Automobile Canada in Mississauga, he was transferred to Calgary to the regional office parts and service department. When the Regional office closed 3 years later, Dave remained in Calgary and worked in the automotive service business as a manager. At the present time, after trying to semi-retire 9 years ago, Dave now works for The Canadian Corps of Commissionaires supervising the uniformed office personnel at the Calgary Parking Authority head office.

He and Frances were married in 1965 and will celebrate their 48th anniversary in August. While never having children Dave and Fran enjoy fishing, model airplanes, cooking and travel. They have always had at least one dog and presently are owned by a BorderTerrier that pretty well rules the roost. Fran has also actively supported Dave during his Masonic Activities as well as being an active member of Delta Kappa Gamma.

Dave’s Masonic career began in 1982 when he was initiated in Ionic Lodge No. 229 in Brampton, Ont. He joined Peel Chapter RAM in 1983, Emanuel Preceptory in 1984, and became a member of Rameses Shrine temple the same year. He served as Senior Deacon prior to being transferred to Calgary.

In 1999 Dave became a charter member of Airdrie Wild Rose Lodge No. 2001 GRA and served as Worshipful Master in 2004-2005 and served as DDGM for Phoenix District in 2011. He affiliated with Strathmore Chapter RAM No. 21 in 2002 and served as First Principal in 2007 and Grand District Superintendent of 3 District in 2008 – 2009 and was elected as Grand 3rd Principal for 2011-2012. Dave is also a Charter Member of Mountainview Chapter No. 42, serving as First Principal for 2012, as well as a member of – Pompilius York Rite College, Zadoc Council of The Cryptic Rite, The Order of the High Priesthood, The Knight Templar Priests and Chinook Conclave #29 Red Cross of Constantine.